No Wading in the Shark Pen

The idiot sign on the shark pen must have been posted for the Darwinian challenged or maybe for the typical Hui Waa member who has the adrenaline addiction of a hard core junkie. The paddle to the Coconut Island (Moku O Lea) U. H. Institute of Marine Biology (UHIMB) had all the trappings that make our paddles special, wind, rain (small craft advisories), schools of papio , a tour of a new research lab, a walking tour of the grounds of a millionaire’s mansion, and last but not least, the shark pen full of hammerheads, blacktips and other sharks. 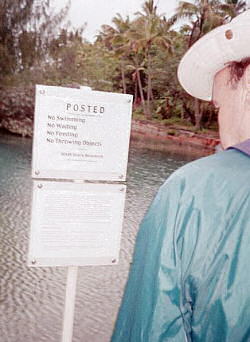 The paddle started with a heavy downpour that failed to dampen the spirits of the dozen members that showed up at Heeia Kea pier. Sean was on his first trip to Coconut Island and was unsure about the inflatable kayak he was about to paddle. "Are you sure the kayak won’t pop and sink, Daddy?" but the sight of Rusty and his family with two more inflatables helped to reassure him. The rest of the club had the Scuppers and other plastic versions that our Hui has evolved into.

Soon we were all underway, and as we turned the corner at the pier, the wind and rain suddenly hit. The inflatable suddenly felt plodding, paddling into the strong tradewinds. The water looked dark and white caps were all around. Still, the fact that we were inside Kaneohe Bay made the paddle relatively safer than most of our other paddles in less challenging conditions. In a short time, we arrived at Coconut Island and we paddled around to the harbor on the Northeast side of the island. Docking a kayak is something that we don’t do on a regular basis, but that is what we all did in an efficient manner without anyone falling into the water! 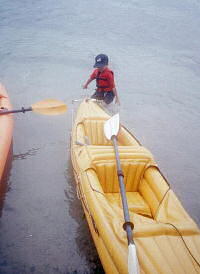 Soon we were on "the tour" as Dr. Kim Holland greeted us and walked us through the facility. The first stop was the lab facility that was designed for the use of Dr. Holland to research sharks, fish or even dolphins under controlled conditions. The facility was actually used by National Geographic to film its special on The Octopus, and some of the special Plexiglas tanks that were designed to film that special were still in one corner. Outside was a giant tank with a school of papio swimming around, another research project that the University of Hawaii was working on to figure out a way to tag the fish to allow identifying them without the need of hooking them.

Then it was off to the grounds of the mansion that had been the pre-war home of the Pauley family. By virtue of a series of good turns, the University of Hawaii now "owns" the whole island. Soon we were off to the highlight of the trip, at least for Sean - the shark pen. The sight of sharks swimming about in the lagoon was an exhilarating experience that we will all remember. With that the tour was over, and we all put in to paddle to the mauka side of the island for a short lunch. By now the wind and the rain had stepped up a notch and we decided that it was time to call it a day. We all agreed, it was a great paddle.